Sorry, for not blogging much lately, it’s a combination of me being really busy and having a writers block.

Anyways, bout coming up soon! This weekend actually, and I’m starting to get really nervous. Every time I see something related to the bout on Facebook, for example when they recently announced that the tickets were up for sale, I get crazy nervous and lots of butterflies in my stomach. It’s just getting so close and so real now. Imagine, in less than a week I will be skating around in front of maybe 500 people! Scary. (but good scary).

The last couple of weeks have been full of training and practice. In addition to derby practice, our league has a deal with the local Crossfit gym, so I have been going there on a introductory class two times a week as well. So it’s been training four to five times a week for at least a month now, which is a lot for me. I have come to discover that I love training this much though, I will definitely try to maintain this amount of exercise.

At derby practice, I’ve tried doing my very best, learning as much as possible and using every opportunity possible to skate. Being on the roster, I feel that I owe it to the team to be as good as possible. I’m never going to feel that I’m ready though. It’s always some things to get better at. But I guess that’s how it is in derby overall, you can never learn all there is to learn, there is always something new or something to perfect.

This week, our stupid practice venue has decided that it’s time for winter break, and everything is closed. We have managed to scrape together one practice. That means it’s only one practice left on skates before the bout! I’m sure that can explain some of my sudden surge of nervousness as well.

I’m sure everything will be great though, and that my first bout will be an awesome experience. What I fear the most is that I somehow manage to fuck everything up for the team, and be the reason for an eventual loss. But, I have to remember that we win as a team and lose as a team, everything does not depend on just one person. And, if I turn out to suck that much, they probably won’t put me in many jams.

I shall end this post with a picture of me playing actually! We played a couple of show-off jams during the break of a handball game recently, where I even played as a jammer! In front of an audience! Huge. It was kind of like a warm-up to the bout next week, at least I’ve played in front of an audience before. 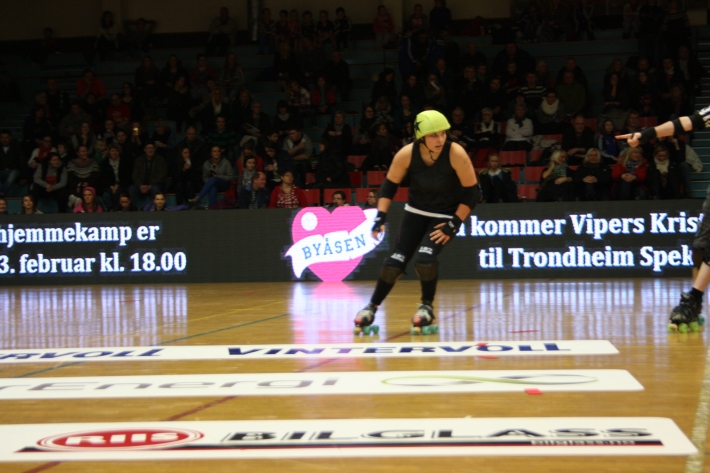 Me jamming! Lead jammer even! Crazy.

A couple of days ago me and my friend Alexandra (also known as Pallah) went on a little skatedate, she on longboard, and myself on roller skates.

We mostly rolled around in a circle, chatting, and getting used to skating as neither of us has much skating experience. I found that using T-stops on asphalt were harder than on the stone-ish floor I’ve been skating on during my late night skating sessions. It also felt like the asphalt were ruining my wheels a lot more than the stone floor. I still had a lot of fun, and even dared to try doing some crossovers. Well, they weren’t exactly full crossovers, but something like it at least. And each time I skate, I notice the time it takes for me to be comfortable on them diminishes. Soon I’ll get on my skates and zoom around immediately, without that little period of flailing arms and fear of falling.

I would love to do some more skate dates, but now I’m back in Trondheim, and my dear Pallah is in Oslo. I have, however, switched wheels to my red tuners, and tried to skate around in my apartment. That felt great, and for now as a newbie, I felt more secure on those wheels as they are broader. In two weeks my derby adventure will start for real, with a fresh meat bootcamp to kickstart the season. I cannot wait! 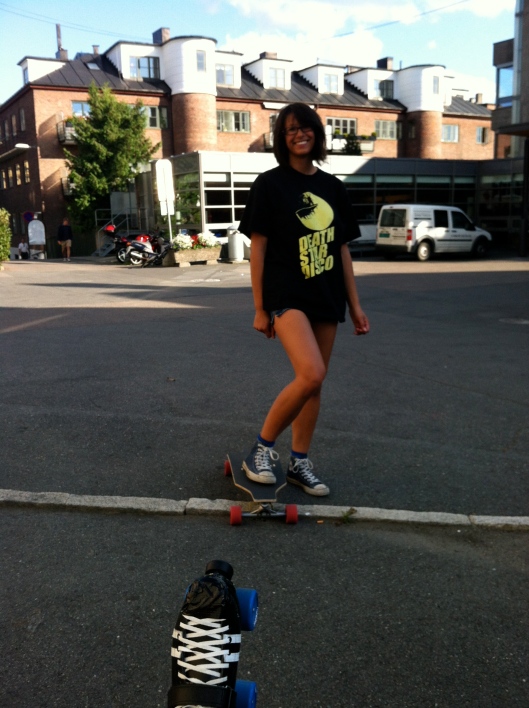 Cutiepie Pallah on her longboard, with my skate at the bottom of the picture.

Now that I’m back in Oslo, I have started taking my skates out to practice. But, being the big wuss that I am, I prefer to skate by my self without anyone watching me, since I haven’t got any newbies like myself to skate with. In the apartment complex that I live in, there is a little building with washing machines and stuff, and a larger room with a long table set in the middle. The last few nights I have been sneaking into that room to skate. The floor is a kind of stone or concrete or something, so it works really well. The downside is that the room is a little small, so I don’t have enough room to get much speed or to be able to practice crossovers or stuff like that. But I have been working on t-stops and some sticky skating.

My only problem is that I haven’t got any pads to protect myself yet. I only have a helmet. I think I’ll have more progress once I get hold of some pads, because now I am really anxious to fall and hurt myself, and I’m sure that’s limiting me in my skating. I have also tried a bit outside, but I find that scary, because each time I go a tiny bit downhill, I start building up speed and my plow stops won’t work. I guess I have to build up some more thigh muscle.

Once I aquire some pads, I plan on skating with some of my friends who are into long-boarding. They are as much newbies at long-boarding as I am at skating, so we’ll be a good match I think. 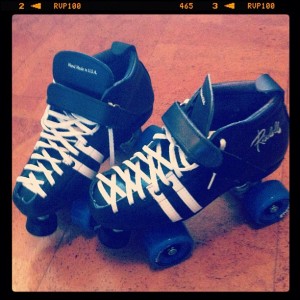 These are my roller skates by the way. They are the Riedell 265 vandals. I originally intended buying the Riedell Wickeds, but my bf bought them for me in the states, and the girl he bought them from recommended the thrust plate instead of the dynapro, as the thrust are lighter and better suited for beginners.

I’m glad he went with the thrust plate. If I’ll be as addicted to derby as i think I’ll be I will most probably upgrade to a better plate eventually, and it is silly to spend more money than necessary on something I’ll end up upgrading anyway.

The wheels that came with the skates were the red Tuner wheels, but I haven’t yet had the chance to try them out. I’ve only skated outdoors, and used my outdoor wheels, which are the Radar Energy wheels. I haven’t skated on that many wheels yet, so I don’t have any reference points, but my experience of the Radar Energys have so far been great. They are pretty soft, 78A durometer, so they’re great at absorbing shock, and I haven’t fallen over because of twigs or cracks in the asphalt.

As for the boots, I don’t have much experience in them yet, I’ll write more about them when I know more what I’m talking about.  One thing though, I had to go down two whole sizes from my US street size. I remember being really nervous about size, as I didn’t have the opportunity to try the skates on myself. I measured my foot and printed out the size chart by Riedell, and concluded with that I needed a size 7. But when my bf bought the skates he used his mom as reference, as she uses just a size smaller than me (in norwegian sizes). They concluded with that I needed size 6,5. When I eventually tried them on, they fit like a glove. I’m so glad I didn’t order them myself online, then I would have ended up with too large skates!

I’m joining a derby league here in Norway after the summer, and in my anticipation I have read several derby blogs. I then became inspired to start my own.  I battled a bit with the decision of which language I would like to use on this blog, before deciding to write in english. I do feel a bit conceited writing in english, but my fellow norwegians will understand english, and maybe I’ll gain some non-norwegian followers as well? After all, the roller derby community seems kind of international and widespread from what I have read and learned.

My derby adventure started maybe eight-nine months ago, when I first became aware of the sport. I had seen the movie Whip It some months before that, but I didn’t consider that Roller Derby was a sport I could actually join here in Norway. When a friend of my in Sweden joined a team in Stockholm the idea struck me that maybe I could join a team here in Norway as well.

I had just moved to Trondheim at that moment, and luckily, the first ever Roller Derby League in Norway had been established there. Unfortunately, they had just had their intake, and I had to wait until May the next year for the next intake.

And now, here we are. I’ve been at the two “open training sessions” Nidaros Roller Derby has organized and have gotten a pair of skates and have started practicing. Getting hold of skates and gear in Norway is really expensive, both if you by them here or order online. At least with the skates I wanted. I wanted some good skates from the start, so I decided on a pair of Riedell 265’s. I was so lucky that my BF went to the states with his family for the holidays, and he bought me a pair of vandals and with that managed to circumvent the stupid taxes you get from importing stuff, and with that I got my pair of skates a lot cheaper. I also found an ok helmet on sale, but I still need to by some pads and a mouthguard.

The rest of the holidays i plan on practicing my skating skills. So far they are almost non-exsisting. I only had my skates for a couple of days before I had to leave with my family on a trip to Lillesand, a town south in norway, to visit some family and friends. The house we are staying in are located in the middle of the forest, so I didn’t see the need to bring my skates, as there are no places to use them.

So, naturally, I cannot wait to get back to Oslo, where I am most of the summer holidays to practice my skating skills. And I’m now looking even more forward to getting back to Trondheim, where I attend university, and for derby practice to start. I’ve been completely addicted to derby ever since the open practice sessions in may. I have been watching a lot of bouts online, have read tons of information about different types of gear and different skates, and started reading the rules on wftda.com.

In this blog I will write about my experience in starting with derby, and hopefully I’ll write some small reviews on the gear I will eventually use and so on.